Reaching home: Our journey in numbers and lists

We are pleased to report that on arrival at Santander ferry terminal,  Brittany ferries already had a plan for what to offer us. We boarded a coach,  travelling overnight to France and then caught a different ferry which got us into Portsmouth actually 1 hour EARLIER than originally planned.  Steve's parents were there to meet us on arrival and after a night's stay at their place,  we've headed North on the train towards Leicester,  pausing in London for a cup of tea with Mel's Mum.

As our journey reaches its end,  we thought we would share some trip lists with you!

Our trip in numbers:

And things we (or at least one of us) are looking forward to...
Seeing our UK friends and family
Being around young people
Unpacking and not having to re-pack for sometime
Less small talk
Being able to travel under our own steam (especially cycling which we only managed for 4 days out of the last 6+ months). 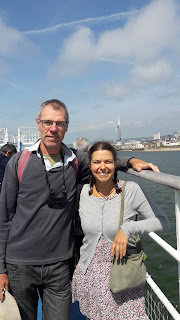 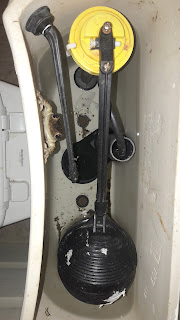 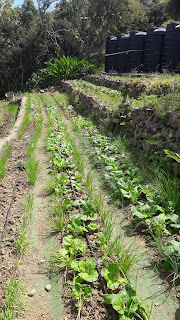 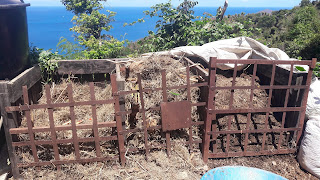 We've finally arrived back in Europe after switching boats in St Maarten. On the boat,  Mel led a daily yoga practice which Steve and 8 other passengers regularly joined in with.  Steve became quite jealous at the delicious and abundant food Mel got served after she'd explained to the chefs what was needed for a balanced vegan diet! The delay and change of European arrival port (Lisbon instead of Malaga) meant missing out on some days with Steve's parents who were meeting us in Malaga. When we eventually arrived there,  we were surprised to find Steve's sister,  nephew and niece there too! Luckily we still had a few days to enjoy the beach together before they headed home. We are now on a train to Santander where we will catch the final boat of our journey - the Santander to Portsmouth ferry. Stop press! While writing this we received a text saying our ferry has been cancelled due to a technical problem! We'll keep you posted on the alternative route we take. 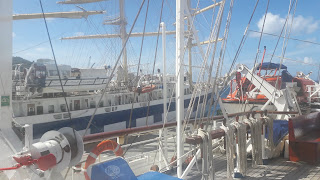 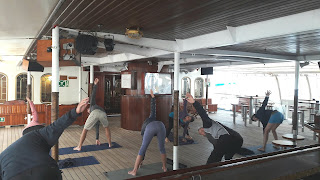 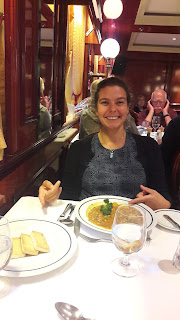 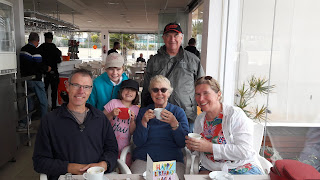 Last Saturday we sailed away aboard the Star Flyer (shown below, dwarfed by other cruise ships) headed for Spain. The wind was blowing against us so we used the engine.  Unfortunately, 3 days out, something on the drive shaft broke.  After bobbing around for a bit, the engineers decided that they couldn't fix the problem at sea and, therefore, we had to hoist full sail and return to sant Maarten. So now, a week after leaving, we're back where we started! The Royal Clipper (the ship we came out to the Caribbean on) has been diverted to pick us up and take us to Portugal. Still, on the upside, we get an extra 2 days in the Caribbean. Everybody is in 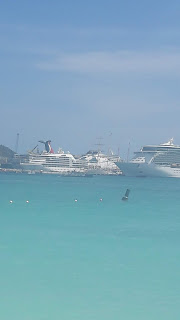 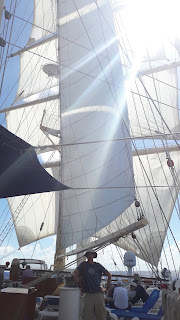 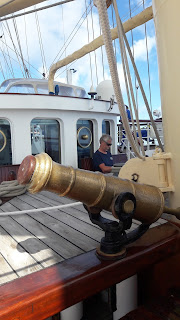 good spirits and most people have chosen to switch over to the clipper (they could have had a flight home instead). Worse things happen at sea!
Posted by Mel & Steve at 15:03 3 comments:

We have arrived safely in Saint Martin by sailing boat. The boat is owned and skippered by our new friend Marc. This time we even went on watch for most of the night, allowing Marc to sleep and getting us in a day earlier than otherwise. We also helped by cleaning the boat ready for his next (paying) 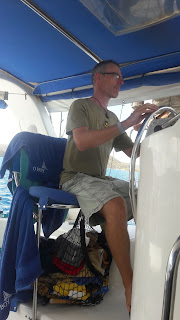 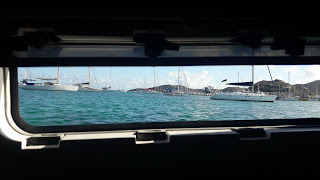 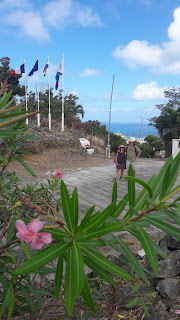 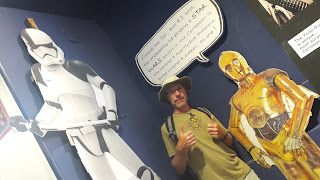 guests. We are biding our time in St. Martin until Saturday, when we will catch the 'Star Flyer' across the Atlantic. This island is unique because it is the smallest island in the world that is split between 2 nationalities. One half is an overseas territory of France and the other half is an autonomous part of the Netherlands. We had a hike along the small stone wall that separates the 2 halves. We have done a couple of hikes and visited some beaches. Steve was also pleased to encounter a museum run by a guy who has done lots of film special effects, including for 'Star Wars'!
Posted by Mel & Steve at 17:33 3 comments:

We're now reaching the end of our 2 weeks in Tortola. We've had good fun and learnt lots. We have weeded (and put the weeds in to the liquid compost tank as pictured), planted crops and harvested crops. We even got the chance to help our host, Aragorn, to sell the produce at a couple of local farmer's markets. In between all this, we've had a chance to explore the island a bit and to play in the sea! Today we are meeting up with one of Aragorn's friends who is kindly going to take us on his boat to St.  Martin. 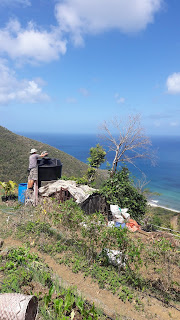 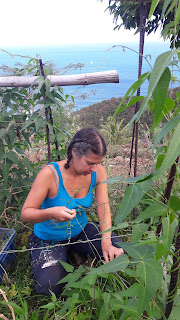 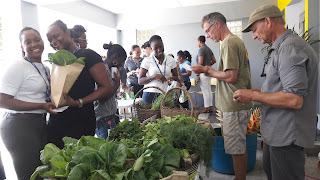 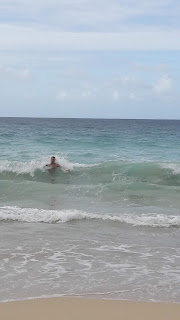 We have now left Puerto Rico.  We were lucky enough to get a ride on a cargo ship that steams between Puerto Rico and st. Thomas in the U.S. virgin islands. The shipping company is owned by friends of Mel's sister and we were able to make the 7 hour journey in the ships galley. We arrived into st.  Thomas at first light as evidenced by the photo below, which has the ship in the background. From st. Thomas we had breakfast and then caught the first ferry to Tortola. Once here, our good luck continued and we m 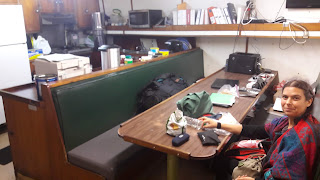 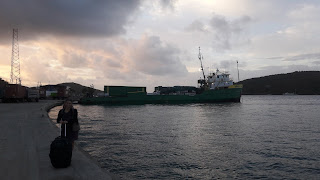 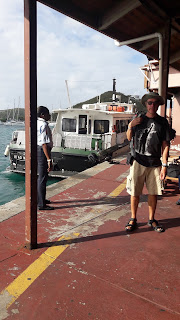 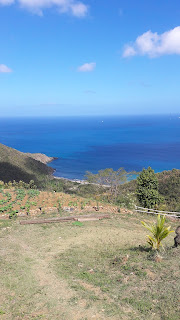 et up with an inspiring figure called Aragorn (named after the Tolkien character) who our good friend Charlotte once met. He runs an organic farm in the hills and has room for us to stay here.  The view from the farm is in the last photo. We are helping out on the farm until the 20th March when we already have another boat to St.  Martin. More news about what we're doing on the farm and on Tortola next time.

All Hands and Hearts

We are now in San Juan once again, enjoying our final week in Puerto Rico, before we head off on Sunday. We have spent the last week working hard on yabucoa, a small town on the south east  coast.  This is where Maria, the category 5 hurricane first made landfall just over a year ago. We were volunteering with the U.S. charity 'All hands and hearts' which does reconstruction work on the many houses and community centres that still remain damaged. We put on full protective gear to treat houses for mould, went on roofs to seal and paint them, as well as other repair and light construction work. We also had time to go out on the neighbourhood and collect litter. It was tiring but useful work and the enthusiasm and energy from the other volunteers was great to see. There were about 80 volunteers and staff, varying from day volunteers to those who have been here for months. You can check out the organisation at www.allhandsandhearts.org if you're interested. 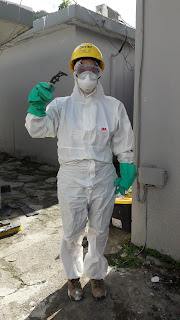 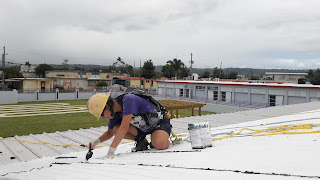 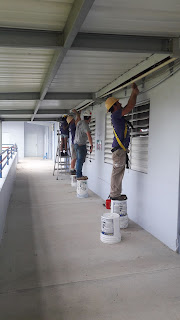 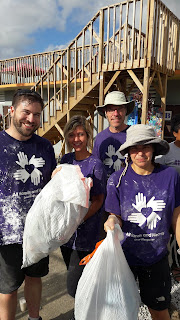 Our Plans (so far)